Creativity is the great way to explore

Minimal design with a hint of colour

The best chance to take

It Happened at the Battery

It was one of those “gotcha” moments! There I was enjoying a drink after a hard day on the golf course. The local TV network was interviewing the Department Head for the Public Works Department. I still remember his exact comments…. But first let me digress…

I was in Charleston, South Carolina. It seems the day before, an 86-year-old woman decided to go fishing at “The Battery,” a world famous area where the Ashley and the Cooper Rivers meet. With the Stately Antebellum style homes overlooking Waterfront Park on one side and historic Fort Sumter out in Charleston Harbor on the other, she leaned up against the guardrail as she prepared to cast her hook into the river. Well, the guardrail didn’t do its job.

It was only about a 4- to 5-foot drop to the waters below, so when she found herself joining her bait, fortunately she was not seriously hurt. However, frantic attempts to rescue her by more than one passerby did not work. It became obvious she needed assistance from the bay side. It was being reported that it took the Coast Guard all of 45 minutes to respond. They found a feisty little lady waiting, cold, tired and somewhat bruised but, and as the reporter commented, in seemingly good spirits and, under the circumstances, in relatively good condition – thankfully!

“The Moment of Truth”

Now, back to my “moment”. The reporter had just asked the question to the Department Head of for the Public Works Department, “What is being done to protect our citizens against the dangerous conditions that are apparent here?”

As this was being asked, the camera was panning the long line of seawall railing that reached almost as far as the eye could see. Everywhere, repairs were evident to the deteriorating guardrail and to the concrete the guardrails were mounted into. The answer this beleaguered public servant gave was my unforgettable and forever remembered moment.

To appreciate why his answer was so exciting to me, you need to know who we are and what we do. The company I had started just a few years earlier was created to produce and improve on a technology which would provide a structural building material impervious to the ravages that Ultra-violet light, chemical and a salt laden atmosphere’s wreck on exterior exposed products.

If you live on the coast and have seen how salt in particular corrodes exposed metals, you would understand this completely. If you by chance were in the railing business, as I had been, you had an added insight in the safety, not just cosmetic, issues this presents. We were in the Railing Business.

His comment went like this; “We are actively and frantically researching the country, looking for a railing system impervious to the salt conditions we have here in Charleston. We need a system that will meet our building codes, withstand the salt and stay that way so we do not have to keep finding funds to replace the same railing over and over again!”

Let me tell you honestly, I almost laid an egg… and did almost choke on my beer! I was so into what I was hearing that I failed to get his name. I wanted to speak with him and show him – we had the answer!

To make a long and tedious story short, in the weeks and months that followed, I made several calls to the local television station just to ask them to reveal his name so I could attempt to contact him.

They treated me like I was some “salesman”. Worst yet, a “Yankee” salesman! Truth be known, yes, I did have something to sell and the company is primarily made up of “Yankees”, however I am not one of them. I did get somewhere when I told the receptionist that I too was a fellow “South Carolinian”. (It’s true – I was born just a short distance from Charleston.)

Finally, the nice woman told me where to call. At last I was thinking… I had accomplished something, only to again be repeatedly put off by other well-meaning not always so nice ladies attempting to protect their boss. Finally, one of them after speaking to “the man” simply said, “send him a sample and if he likes what he sees, he will get back to you. Needless to say I did…and he did. He was impressed. That gave me the excuse to again visit the area of my birth and family. 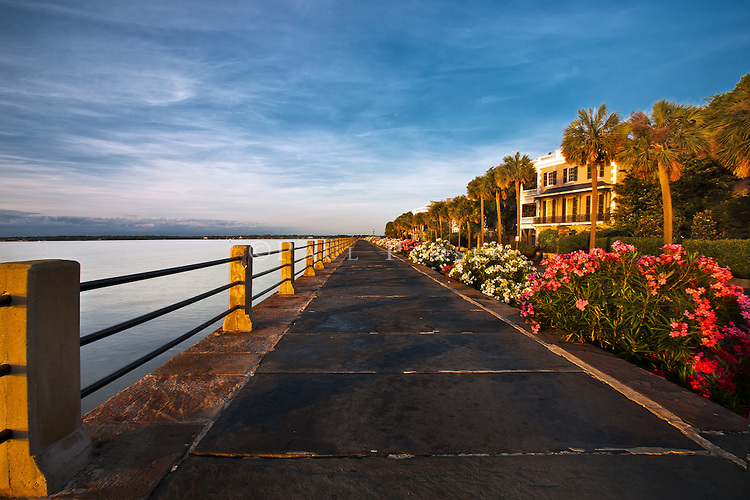 Today, some 20 plus years later, as you walk the expanse bordering those two rivers you will see black, highly structural thermoplastic guardrail. Of course, you will not know it is a special highly technical and proven material. It will just look good. In Charleston there is a special historical pride. Our railing needed to mirror the look of 200 years ago. One of the most powerful agencies in Charleston is the “Preservation Society”. Other than some unsightly bird residue, it looks as good as the day it went in and just as good as in the days of the Civil War. More importantly, it has proven the fact that a railing system does exist that will not succumb to salt, sun and sea. As good as it is, with advancing technology the railing produced today is even better.

The only thing I have always regretted is the fact that I was never able to meet and thank that 86-year-old lady for falling in the bay!

As the saying goes; “This is a True Story”.